Proper reticle alignment is achieved when the projection of the elevation turret axis goes through the center of the rifle bore(see Figure 7). Another way of stating this is that the elevation turret axis must be parallel to a reference line intersecting the scope tube axis and the rifle bore axis. If the reticle is not aligned properly, there will be aiming errors – similar to canting errors – at any range other than the one at which the rifle was zeroed. For a properly aligned and level reticle, changing the turret elevation will result in the bullet impacts landing on a vertical (plumb) line. For a misaligned reticle, the bullet impacts will land on a tilted line, rather than a vertical one. 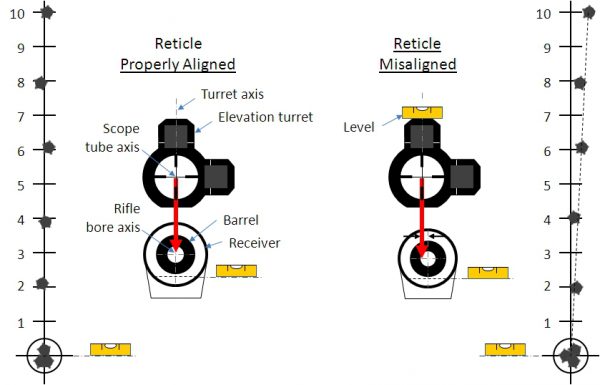 Perfection is always difficult to achieve, so we set an alignment accuracy “tolerance”, below which the aiming errors will be too small to notice. The reticle alignment accuracy tolerances are different for short range and long range shooting. For short range shooting (generally less than 500 yds), the reticle can be rotated by several degrees before the resulting aiming errors will be large enough to notice.

Why not just level the base and scope turret?

Most people simply align the reticle to the base or rail, using either levels or shims between the scope and base.  Some people “eyeball” the reticle by looking into the ocular from the buttstock. These simple methods usually result in reticle alignment error because the rings are not centered over the bore (see Figure 8). Even when the rings are centered over the bore, a bent rifle bore or crooked barrel installation will cause the scope tube to be misaligned.  Still, these methods work fine for short range because the aiming errors are too small to notice. Not so for long range.

Remember that one minute of the clock is equal to 6 degrees, so  a +/-1 degree angle tolerance is smaller than we can achieve by “eyeballing” the reticle. A method of locating the reference line connecting the scope tube and rifle bore axes is needed. This requires that some type of alignment tool be used at the objective, rather than the ocular, because the objective is closer to the muzzle (where boresighting should be done). Finally, the rifle scope must be boresighted to the rifle bore.

Why is Boresighting Important?

Boresighting gets the scope tube aligned parallel to the rifle bore at the muzzle (where it matters). Most people assume the bore is parallel to the receiver, which is parallel to the scope base. They also assume the scope is centered over the receiver and barrel. However, modern high volume rifle production has very wide tolerances for barrel straightness, barrel-to-receiver alignment, and receiver dimensions (See Figure 8).  To some degree, most barrels are bent or they’re installed crooked in the receiver. If the rifle bore is not straight, the last few inches of the bore near the muzzle determine the bullet point of impact.

Also, Picatinny and Weaver rings generally do not center the scope tube over the rail. Bases can also be mounted off-center, or can be tilted on the receiver. Even an offset of just 0.03 inches can lead to a canting error of 2 degrees. The result is that most scope tubes are not parallel to, or not centered over the rifle bore, and misalignments of 15 MOA or more are common.  By comparison, in the RingTrue™ installation process the tolerance for rifle bore-to-scope tube horizontal misalignment is +/- 4 MOA.

RingTrue™ reticle alignment. The scope tube is first horizontally boresighted to the rifle bore at the muzzle. There are other benefits of boresighting the scope tube, so we always do it when installing a scope. Then we use a special reticle alignment tool to plumb the reference line intersecting the scope tube and rifle bore axes. This alignment tool is used at the objective, which is closer to the muzzle. This eliminates errors due to crooked barrel mounting and minimizes errors due to a bent barrel. Finally, we level the reticle, tighten the ring screws, and we’re done.

Using our accurate levels everything can be squared up within 1 degree. That’s equivalent to less than ¼” horizontal point-of-aim offset for 12 MOA elevation at 100 yds. Most long range shooters would be satisfied with that alignment error, since it corresponds to only 2” POA shift at 1,000 yds.

Of course, there’s no point to doing all this unless you are also using an anti-cant level attached to the scope tube (not attached to the rail). Canting errors will be worse than any point-of-aim error due to minor reticle misalignment.